Stop Making Excuses Due to Fear and Start Doing 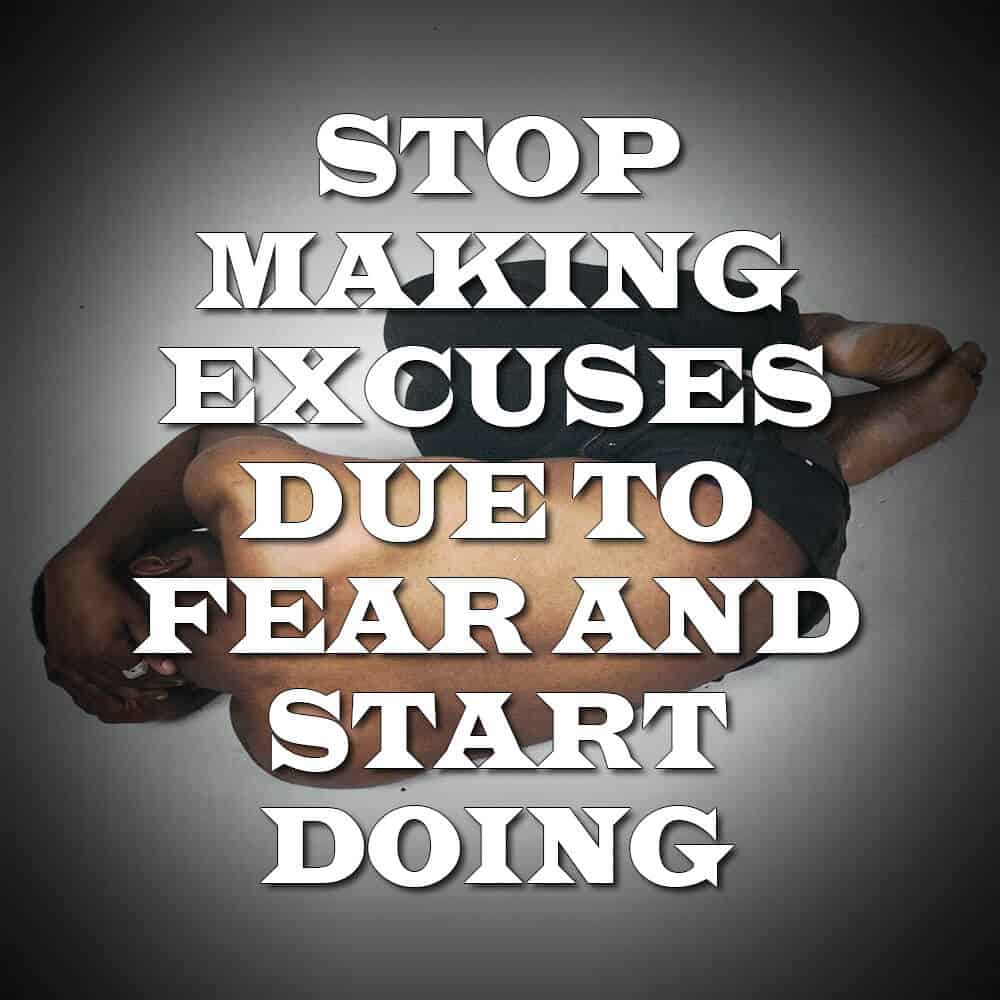 For many of us, fear stops us from doing what we want and need. Fear can be debilitating and paralyzing. When our comfort zone is challenged, fear sets in and stops us dead in our tracks.

Then we end up making excuses, which essentially just reinforces the fear. Instead of giving in to fear, it’s time to conquer the fears and live the life we were meant to live.

Being completely free of all fears isn’t rational, or safe. Biologically we are wired to handle threatening situations by a fight, flight or freeze reaction.

Walking down a dark alley at night isn’t a good idea. Why?

Because we don’t know what’s lurking in the dark and it’s not worth the risk to find out.

Swerving through traffic at an increased rate of speed also isn’t a good idea. Why?

Because we can’t predict the behavior of the other drivers and the results could be disastrous, even deadly.

Those types of fears are normal and necessary.

Irrational fear can be based on many things, some of which include:

By no means is that an exhaustive list, but they are some of the most common fears that keep us from moving forward, and there’s an excuse for every fear.

In some way we rationalize our fears by providing excuses so we aren’t forced to challenge ourselves. The thing is, without challenges personal and/or professional growth is virtually impossible.

Let’s look at some of the best excuses we lean on, how to push past the fear and start doing.

Excuse: I don’t know how.

Solution: If you’re reading this right now, you’ve got all the tools you need to discover just about anything. The internet is like having every resource known to man right at your fingertips. Videos and tutorials are the big thing, in case you didn’t know. No one else on the planet is more responsible for what you know than you.

Solution: First of all, that’s probably untrue and you’re telling yourself a lie. Not being confident or comfortable around other human beings doesn’t mean you don’t like them.

It means you need to expose yourself to others and learn that you aren’t so different after all. Humans are naturally social creatures. Just get out there and start mingling!

Excuse: I don’t know what I want.

On the other side of the paper write down things that make you unhappy or uninspired. Fix the compass of your life to point in the direction of the first side of the paper. Your goals and desires will eventually surface when you are honest with yourself.

Solution: Did you know Harlan Sanders franchised Kentucky Fried Chicken when he was 62? Or that Samuel Jackson didn’t land an award-winning lead role until he was 43? Or that Ronald Reagan was 70 when he became the 40th American President? Or that Peter Roget invented the Thesaurus at age 73? Age is a poor excuse. Don’t use it.

Solution: Mark Zuckerberg launched Facebook at the age of 19. Alexander Graham Bell was 18 when he began developing the telephone. The Braille reading system was invented by Louis Braille when he was just 15.

Age doesn’t limit intellectual ability or creativity, but your excuse sure will if you allow it. Ask yourself this question: At exactly what age will I be old enough? If you can’t answer it, your excuse is invalid.

Excuse: I don’t have the time.

Solution: The truth of the matter is, if it’s important enough to you, you’ll make the time. Sometimes we can’t figure out a starting point and use a lack of time as the excuse to never even get started. It helps to start small.

Break up an overwhelming project into smaller tasks so it doesn’t feel so intimidating. Use an agenda, a calendar or project management app to get organized. Once you have steps it’s easier to climb.

There will always be fear. Frankly, it’s inevitable. There will also always be reasons to quit or not start at all. You will never know how far you can go until take the first step. And the next.