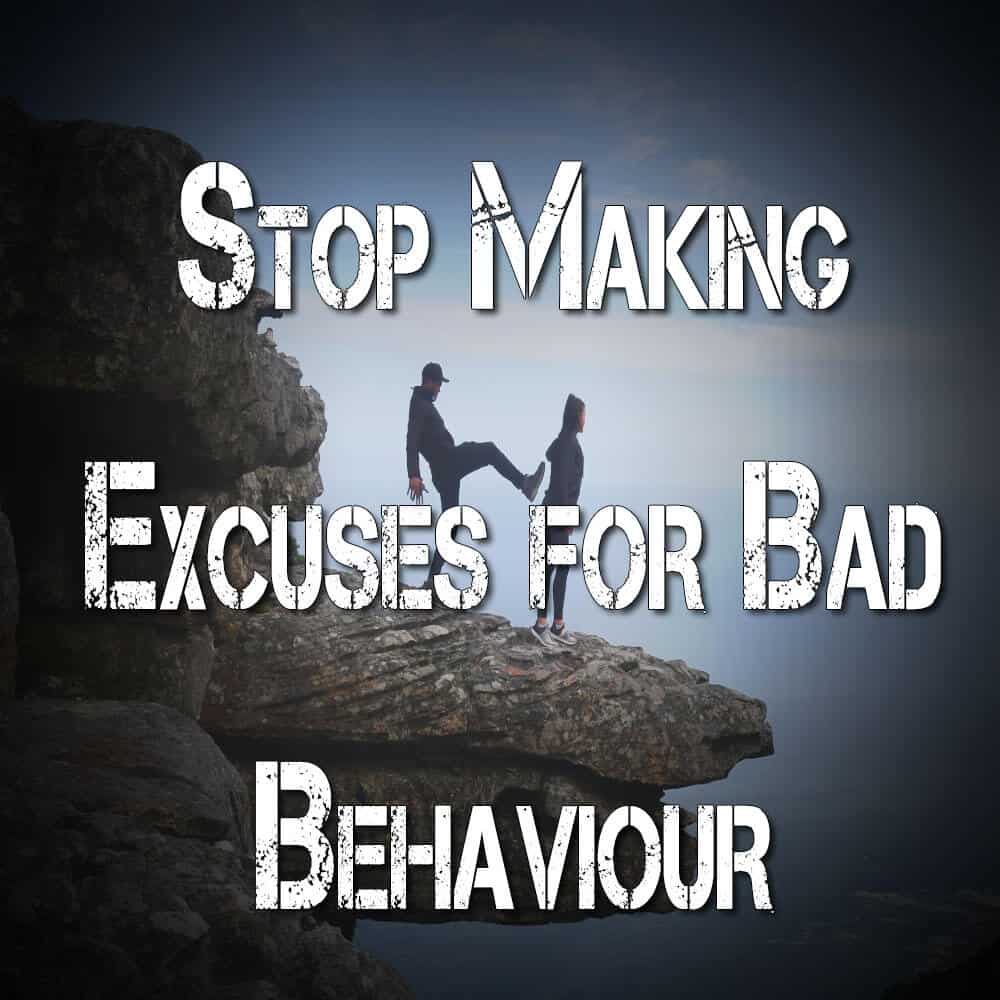 There are many things we can’t control, and sometimes we are put in a difficult situation that prevents us from keeping our promises or from delivering what is expected of us. When times like that happen, we crave for understanding from the people we disappoint.

On the flip side, when a family member or friend wrongs or disappoints us, we try to understand and accept whatever justification they make for being late, for not showing up, for telling lies, and so on.

That is fine for an occasional lapse, and forgiveness is noble, however, if we keep on making excuses for our own or other people’s bad behavior, that is another story. We all know that habitual bad behavior is unacceptable. Still, people often choose to find something or someone else to blame for their bad behavior or that of their loved ones.

When anyone does that repeatedly, especially if unchallenged, it becomes a habit. A person will continue because they know they can get away with it. This is simply taking the path of least resistance, but it is not exemplary behavior.

Why Should You Stop Making Excuses for Bad Behavior?

Simple. It’s neither good for you or for the ones you’re making excuses for. If you’re someone who keeps on making excuses for turning up late, it shows that you’re not valuing other people’s time and that you think you are more important than them, or at least that your time is more valuable than theirs. You are also not managing your time well.

Have you ever told yourself, “It’s okay, everyone else is doing it anyway”? You want to be right, so you give justifications for your actions, even though deep down, you know it’s not true.

Maybe you don’t want to get emotionally hurt, so you avoid confronting the issues, and you lie to yourself. Perhaps you’re in a bad relationship with someone, and your friends are pointing out to you the red flags, and yet you refuse to listen to good advice that you should just leave.

Or, “I’m too busy,” you say, when you’ve been wanting to lose weight but you haven’t exercised even a bit.

Making excuses for your poor choices could have serious repercussions - on your career, personal relationships, self-esteem, and physical health. Being consistently late for work can affect how your employer and your co-workers view your professionalism. Staying in a toxic relationship will not make you happy.

Meanwhile, if you make justifications for other people’s bad behavior when they have wronged you, it is also doing more harm to them. For instance, when someone is abusive, and you tell yourself it’s okay because he had a difficult childhood, it disempowers that person, as well as destroying your happiness.

By allowing them to continue their bad behavior, you are saying that they are not capable of getting better. It can also make them act like an entitled jerk. Having a bad life doesn’t mean they should be a bad person.

You Have to Stop Making Excuses for Your OWN Behavior

Recognize your mistakes and take responsibility. Grow up, as this is a real form of emotional immaturity. Don’t let fear overcome you. Instead, confront the issues and build your self-esteem. Listen to yourself. Assess how you’ve been acting and determine if you’re behaving in a way that’s not in line with who you want to be. Don’t be afraid to fail, because it’s an important part of learning and succeeding in life.

As a member of society, you also need to help others to stop justifying their unacceptable behavior. Say no to an abusive person. Call them out for their negative words and actions. Analyze your relationship with them. If they are not willing to get out of their way to meet you, why should you? Those who truly care would make time and find ways to be there for you.

Let’s not make life more complicated than it already is. Simplify it by focusing your time and energy on people who deserve your kindness the most, and those who have earned it. You deserve to be treated right as well, so don’t sacrifice your happiness.

Everyone deserves the benefit of the doubt, but when they are repeating a bad behavior, don’t just let them get away with it. Because you can do something.

Send this to a friend