What Does It Mean to Become Unstoppable? 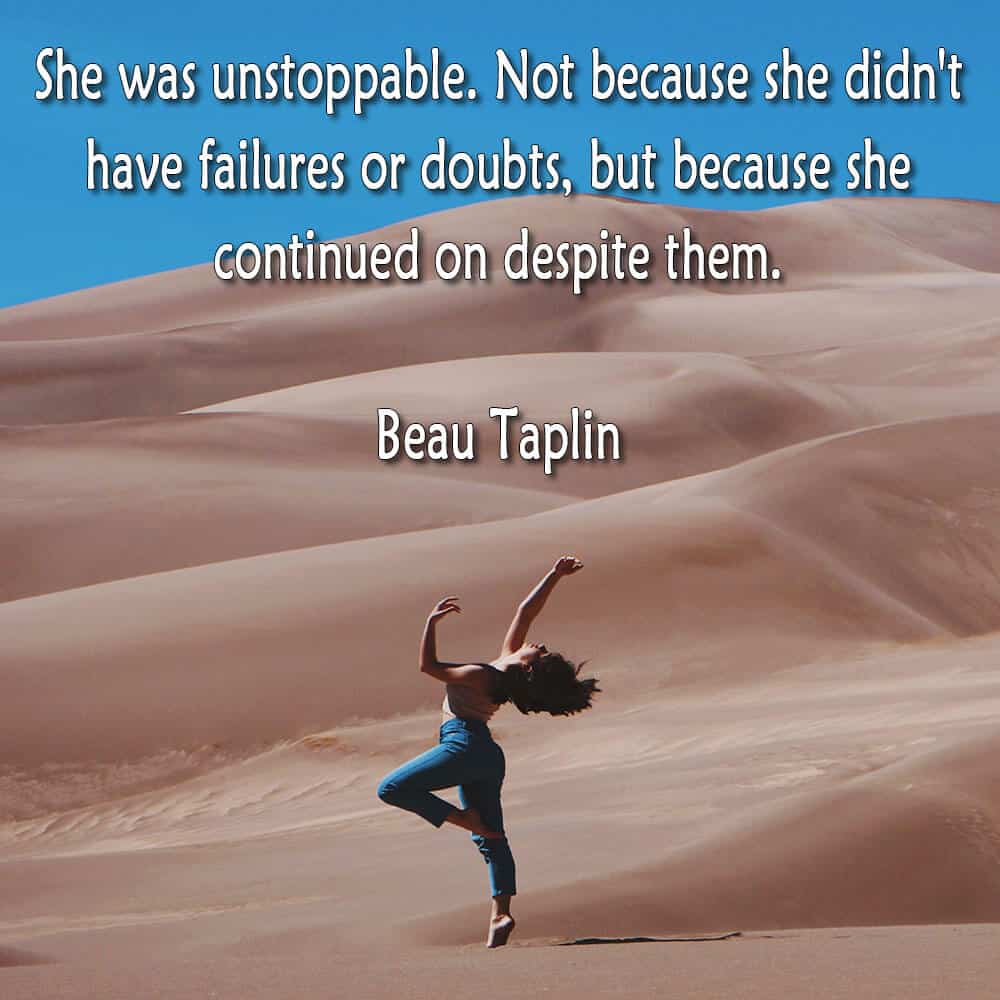 She was unstoppable. Not because she didn't have failures or doubts, but because she continued on despite them. -Beau Taplin

Are you someone who easily gives up even before you get started? Or maybe you often stop when you’re in the middle of something? Or are you the type who pushes through no matter what?

If you’re the latter, then you are unstoppable! You never give up. You never quit.

If you’re the former and would love to know what it means to become unstoppable, then you’ve come to the right place. Let’s break down what it entails to be someone who never quits!

You Don’t Compete with Anyone

When you are unstoppable, you don’t compete with anyone else but yourself. You don’t dwell too much on what other people are doing and how successful they are. Instead, you focus on your own path. In doing so, you stay authentic and don’t just do things just because you see them “working” for somebody else.

Unstoppable people inadvertently make others compete with them instead!

Too many people just keep on thinking and analyzing, often overdoing it. Preparation is essential, but don’t get bogged down by agonizing over every possible future problem.

Unstoppable people take action. You trust yourself and your future. Overthinking can put you off course and lead you to wrong decisions.

You Get Your Motivation From Within

While many people are driven by material things and other external factors, unstoppable people rely on their personal qualities to push through. The quest for money and fame can be a driver, but if it is the only one, it can be destructive.

When you get your motivation from within, even without the prestige and material rewards, you will still be yourself, someone who can push through their personal limitations and give their all.

You Have A Strong Sense Of Self-Control

That’s why you focus on yourself and what is within your control. When some plans don’t go according to do how you laid them out, or when situations don’t pan out the way you imagine them, you are not discouraged to the point of quitting. You get back up and try again.

You Don’t Fold Under Pressure

Many people can’t handle pressure, and strangely enough, often can't handle the success and prestige they have been chasing when it does arrive. An unstoppable person develops the resilience to handle changing circumstances. While some others become lazy once they’ve reached a plateau, you strive for greater achievements.

Anyone who has had any success is always amazed at how many more options are available from their new position, that were previously unseen. Learning never stops, and you don’t forget the things that have given you your previous success.

You Are Not Afraid To Fail

Why do so many people not succeed? Too often, its because they are too afraid to fail. When the going gets tough, they stop. They think that if they are going to fail anyway, why not stop now? On the contrary, an unstoppable person is not afraid to fail.

You are emotionally tough enough to view failure as feedback and make necessary adjustments. You are persistent. Setbacks and disappointments are part of the journey, but you are resilient, and you never quit.

You Are Focused On Your Goals

Everyone has a dream, but not all are truly committed to fulfilling them. When you are unstoppable, it means that you dedicate yourself to the fulfillment of your dreams. You set clear goals, both for the short and the long term, and you are focused on achieving them.

Also, you don’t stop with a goal that you are sure you can reach. You set goals that are beyond your capabilities right now because nothing is impossible! When you are focused on your goals, quitting is out of the picture, and you thrive even more under pressure.

Many people are able to have some success, but not all are able to reach the top or stay there. Some fail along the way. Being unstoppable means never giving up even when you hit a roadblock or when the climb is uphill.

It means pushing through and exceeding your expectations of your own abilities. You are able to win the battle against yourself when you do have self-doubt.

You trust yourself, and you do everything you can to get what you want and what you deserve.

Send this to a friend